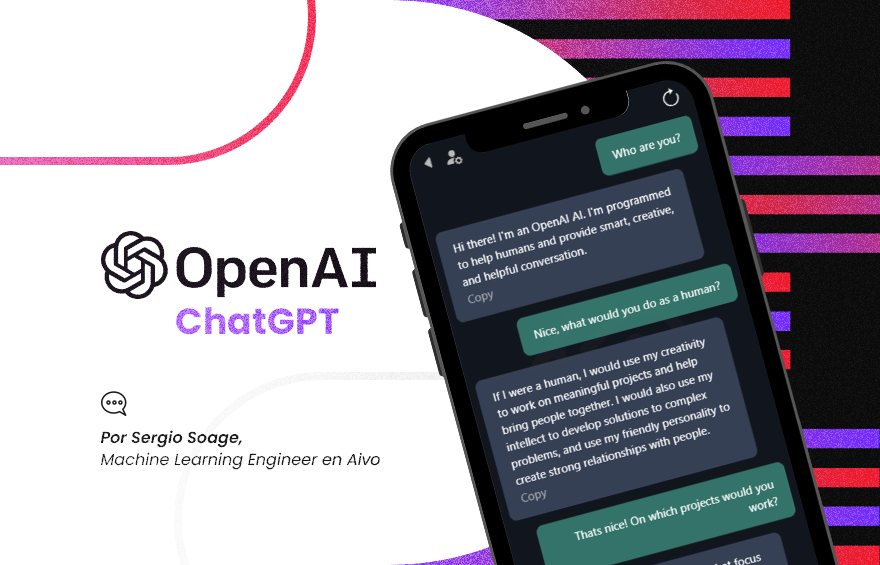 When we started the planning process for this series of articles, the initial idea was to introduce the fundamentals of Natural Language Processing. Then, to explain the most important technologies, discuss the advances and show what we use at Aivo. However, due to recent advances in the field, we decided to (momentarily) jump to the present, specifically to ChatGPT.

Next, we explain this technology, how it evolved, and its main advantages and limitations.

GPT: A brief timeline of its upgrades

What is ChatGPT? To understand it we have to go back to the beginning of the GPT family of models. GPT stands for “Generative Pretrained Transformer”. The original paper was written in 2018, and it generated a significant change, mainly in the subfield of transfer learning. This model could be retrained with relatively little data and achieve SotA (State of the Art) results in multiple benchmarks.

GPT-2 was the next evolution, launched in 2019. This model used an architecture similar to that of its predecessor but with some updates: It was considerably larger, with 10x parameters, so retraining the model was already a complex task due to the infrastructure it requires. It also changed the data with which it was trained, that is, “WebText” (data from the Web, for example, Reddit).

These changes generated certain emerging capabilities in the model: first, the ability to generate “coherent” text, and second, the ability to do “few-shot learning”. That is, learn without retraining the model, using a few examples in tasks that the model never saw in its initial training. At the application level, GPT-2 could generate very realistic news titles, it was also adopted to generate images (feedback loop between NLP and Computer Vision). However, when it tried to be adapted to create conversational tools, it failed.

And this brings us to GPT-3, released in 2020 and with multiple improvements made until 2022 (including ChatGPT). Again, the architecture was not changed much, but the number of model parameters increased from 1.5 billion to 175 billion, and also changed the dataset. They added a lot more data from the Web such as CommonCrawl, Wikipedia, and updated WebText. Like its predecessor, GPT-3 sets new SotA in multiple benchmarks and greatly improved its zero-shot learning capabilities. Like all Foundational Models (so far), it showed biases (religious, gender, etc) and demonstrated its virtues but also its flaws. In a future article, we will focus more on this point and the technical characteristics of the model.

All this introduction was to talk about ChatGPT, which would become a GPT-3.5 version. The original GPT-3 model was trained with a simple goal, which is to predict the next word given a massive corpus of data. With this very simple objective, certain emergent capacities are observed, such as simple reasoning, programming, translation, and the already mentioned few-shot learning. However, this is not enough for more complex tasks: you have to “force” GPT-3 to autocomplete text by providing human feedback, that is, curating certain examples.

For GPT-3 to learn (without being retrained) it must be provided with certain samples and context via a technique called "Prompt Engineering". This technique is a BUG, not a feature since it is caused by the misalignment between this objective of predicting the next word and the final use that you want to give to the application.

Chat GPT and the model on which it is based, Instruct GPT, are in charge of correcting this bug in a very sophisticated way. To fix this misalignment, humans must be involved in teaching GPT, and in this way, GPT will be able to generate better questions as it evolves.

Advantages and limitations of ChatGPT

Now that we've covered how Chat GPT works, what does this model mean for the field? Does it mean that we have solved AGI (Artificial General Intelligence)?

For the field, it is a major evolution. However, since the data with which the model is trained is not available and we do not have code to replicate it (because, ultimately, it is a commercial product), we cannot analyze its implications in a 100% scientific way. We can make approximations, and after 3 weeks of hype and study on the results generated by the model, we can find great points in favor and great points against.

Some examples of the implications of producing erroneous outputs:

The great Foundational Models like GPT imply an exponential advance in the field, but all these advances must be analyzed deeply.

This analysis allows us to identify where they fail so we can improve them in future iterations. At the rate with which we are observing these advances, there is no doubt that a very promising future awaits us, but also that it will require a lot of responsibility from all those involved in the field. 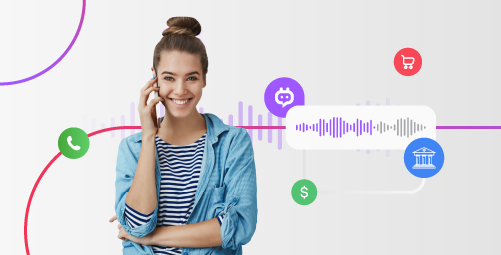 Want to know how voice bots with AI can help your financial institution? This article breaks it all down, explaining what they are, how they work, and the many ways in which they can benefit your cust 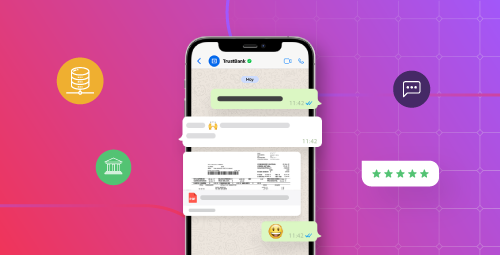 Conversational banking is here to revolutionize the banking experience. In this article we discuss its benefits and future challenges. 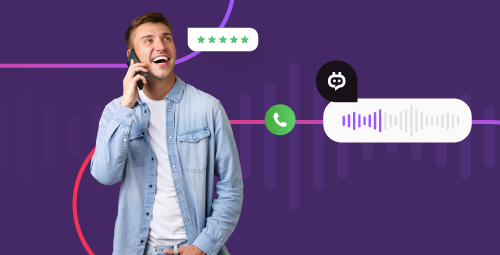 Voice is the next step in conversational AI: A key functionality with challenges to overcome

Voice chatbots: implications, challenges and opportunities of a technology that has arrived to revolutionize the customer service experience.

Visit the blog
The complete guide to voice bots with AI for the financial industry
Strategic challenges moving from homebanking to conversational banking
Voice is the next step in conversational AI: A key functionality with challenges to overcome
Customer Service Challenges in Banks and How to Overcome Them
Best practices for setting up a chatbot with conversational AI
Customer Experience Trends for 2023
The Complete Guide to WhatsApp Customer Service
Sitel Group: Global Success in Customer Experience
ChatGPT: training process, advantages, and limitations
Introduction: The risk of the foundational models of artificial intelligence
Conversational AI Is Shaping the Future of the Education Sector
Macarena Consulting: Aivo’s key ally in CX
The Importance of Accessibility in Customer Service
Dynamism and self-service: How Specialized Brazil incorporates conversational tours into its sales strategy
Banco Bolivariano shares its experience using WhatsApp as a communication channel
Conversational journeys for banking: How Banco Comafi solves customer queries instantly
Efecty introduces Gyra, a bold, agile and innovative virtual assistant
Why It’s Important to Measure Your Customer Service Strategy
Advantages and disadvantages of Chatbots: everything you need to know
How to anticipate customer service demand with AgentBot
7 Effective Chatbot Strategies To Generate Leads From eCommerce Websites
How Telcos Are Using Chatbots to Boost Their Business
Conversational AI is the Future of Healthcare
Customer Service vs Customer Experience: Explained
Conversational AI for the Telco Industry
How a Chatbot Can Kill Your Black Friday Vs. Conversational Journeys
Engage: How to send proactive discounts via WhatsApp
Chatbots in Telcos: Pros & Cons
Black Friday is not just for e-commerce
8 Critical Customer Service Skills for Live Chat Agents
The Complete Guide to Chatbots for Marketing
Black Friday: How to Successfully Deal With Overdemand
Black Friday: How to Sell More With Conversational AI
What are automated conversational journeys?
The Importance of Integrations When Implementing a Chatbot
What Is Conversational Marketing?
How to evolve your Customer Experience strategy with Video Conversational AI
Best practices for developing a conversational AI video avatar
What Is Video Conversational AI: Uses and Main Benefits in Customer Service
Video Conversational AI: The First Step Towards the Metaverse
How Banks Are Using Chatbots To Boost Their Business
In-Depth Guide Into Banking Chatbots in 2022
A Complete Guide to Conversational AI for Banking Industry
Digital Customer Experience With Chatbots: Connecting the Dots for Better Outcomes
What Is the Difference Between Conversational AI and a Chatbot?
How To Use Chatbots for Marketing
5 Benefits of Using Chatbots for Customer Experience
4 Ways Conversational AI Is Improving the Customer Experience
What a Great Digital Customer Experience Actually Looks Like
How to Use WhatsApp Business With Multiple Users
How to Integrate Whatsapp in Your Digital Marketing Strategy
6 Ways Chatbots Help Healthcare Providers and Patients
How AI is Changing The Healthcare Industry
How Chatbots Are Redefining the Banking Experience
7 Ways Artificial Intelligence Will Change FinTechs
How to Use Chatbot-to-Live Agent Transfer Like a Boss
7 Reasons Why Your Business Needs a Live Chat
Chatbots in Banking: Pros and Cons
AI Chatbots for Improved Student Services
Why Do Universities Need a Chatbot?
How Shopping Chatbots Improve Customer Experience
How To Automate Your E-commerce Customer Support With Confidence
Once again, Aivo Ranks as a Chatbot Leader in the G2 Spring Report
WhatsApp vs. WhatsApp Business: What's the Difference?
How to Start Selling on WhatsApp
How to do Marketing on WhatsApp Effectively
How to Sell More and Provide the Best Customer Support Using WhatsApp Business
How to Automate your Communication Strategy on WhatsApp Business
5 reasons to use a chatbot in Telecommunications
A global strategy: Meet Cemex's multilingual and international bot
Complete journey and agility: How TAG Livros optimizes its service for moments of high demand
Automated and empathetic service: Jeitto Crédito shares how fintech can be even more efficient
Smooth and easy communication: How TOTVS optimized its support using Whatsapp Business
Thinking ahead and building together: how InvenIT wants to improve the customer experience
The five keys of VASS in digital transformation
Constant improvement and attention to detail: how Serasa optimized large volumes of inquiries
Integrations, innovation and content: this is the BAC Credomatic service strategy
Empathy and omnichannel experience: this is how Banorte puts its customer first
Why is point of sale (POS) data collection useful?
The challenge developing content for a virtual assistant
Black Friday in numbers: how to get ahead of the over-demand
WhatsApp Business: customer service’s powerful ally
7 benefits of Chatbots with conversational AI in customer service
4 ways conversational AI can promote fintech
6 things a no-code solution can do for your business
Why your bot answers need complements
Inside UX design: The importance of being customer-centric
Instagram for businesses: connect with your customers and manage service to scale
5 common mistakes when implementing an AI bot
Best sales strategy: GM now sells cars through its conversational bot
E-commerce chatbot: how to increase sales and retention on your website
Best transactional experience - Tracbel: providing an innovative experience in a traditional sector.
What are we talking about when we talk about conversational AI?
Facebook Messenger Chatbots: How They Can Help Businesses
Best post-pandemic CX strategy: the Grupo Petersen experience
Zendesk Brazil: Omnichannel solutions, lessons and trends in CX
Innovation and customer-centricity: Zendesk's approach for 2021
9 ways to increase satisfaction on digital channels
Best bot personality: the story behind Olivia, ADT's conversational bot
The power of adding evasive answers in chatbots with artificial intelligence for effective communication

Are you looking for new ways to improve your CX?

Our customer service solutions powered by conversational AI can help you deliver an efficient, 24/7 experience  to your customers. Get in touch with one of our specialists to further discuss how they can help your business.